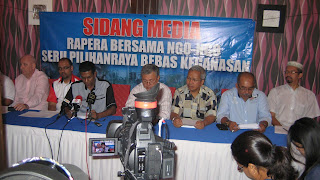 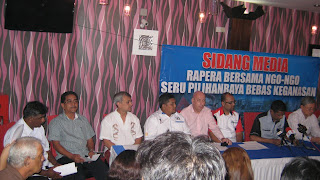 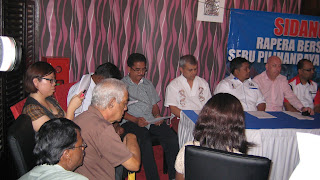 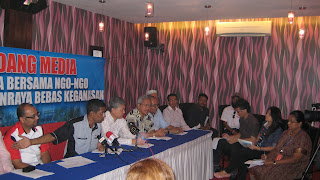 Relevant to our society with some modifications?

Politicians are at it again - manipulating facts to gain public sympathy and VOTES and probably also to prevent the Registrar of Societies to do its job in  accordance with the law, This time, the politicians who are being naughty are from the DAP.

There was a complaint against the election of the CEC members by DAP MEMBERS themselves. The ROS has to investigate as it procedurally should. Since investigations are ongoing, the status of the CEC in the future is therefore uncertain in law. A full inquiry has to be done by ROS to determine whether there is any validity in the complaint by the DAP's members.

At this moment, TODAY, the CEC has not been declared invalid nor has DAP been deregistered. The Election Commission (SPR) has also recognised the '"rocket" symbol and has allowed tis symbol to be used in this PRU13. NO issue on symbol! Period.

SO, any talk of DAP using another symbol to contest has no basis in law but purely an election tactic to garner sympathy votes and to confuse the voters. It is also aimed to politically associate ROS with BN so as to achieve various objectives - including  to pressure ROS not to act on the complaints by the DAP. I think we should stop having different sets of laws for politicians regardless of from which political party they come from.

It is shameful to use these tactics to trick the ignorant sections of the public to vote for DAP. It surely sounds like dirty politics.

The answer is: NO ! Recall that UMNO was once deregistered and it did not affect the status of the UMNO MPs and Aduns. They still remain as valid members of Parliament and State Assemblies. Let us not forget that independents do not stand on the platform of any political parties. There is no legal prerequisite that an election candidate must belong to a political party - any solo goreng pisang seller also can be a candidate.

When do you stop being immigrant?

If we do not Vote carefully, we lose and only the Politicians win! 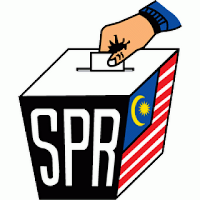 BY now, the Malaysian voters already know who will be the candidates from all sides. Any remaining doubts will be removed on 20th of April, which is the nomination day. Polling day has already been fixed on the 5th of May 2013. Hence from the 20th of April to the midnight of 4th May, we will be witnessing election campaigning from the candidates.

Election campaigning is of course intended to persuade the voters who have yet to decide. It is never influences the hard core supporters of political parties. The hard core supporters owe their loyalty to the party and not to the Rakyat’s interest. There is also another specie of voters who will vote and persuade others to vote based on their narrow, selfish interests. Again, these people will not be influenced by the campaigning period.

To be able to vote wisely, it is important to have as much facts and information as possible about the political parties and the candidates. The more accurate information and facts that you have, the more able you are to make better decision objectively. Unfortunately, most of us are prone to subjectivity, sentiments and emotions – something we should be wary of when we attend election rallies and hear their fiery speeches.

For sure each side will expose the weaknesses and defects of the other side – which is good for the Rakyat to know! The voters then will have to weigh the weaknesses and the strengths to make a decision as to who deserves their vote. There will also be “spinning” and various “tactics” used to influence the voters. We must be able to identify these accurately so that we do not become a victim of misinformation.

The qualification, experience and the overall personality of the candidate is important. It is not just a simple criterion of “new or old faces”, “young or old”, “religious or otherwise”. It has got to be an overall list of items that you may want to include in your own checklist. After all, the bottom line has always been that NO political party has a system that is able to throw up the best of citizens for political leadership. So, we are left with choosing the best from who are available.

At the end of the day, make sure it is the RAKYAT and not the politician that wins.

Good luck in your voting and hope you make the right choice in the interest of our Nation.

Inside Story - Is it time for change in Malaysia?