Political Leaders Failed our Kids in the English Language Sector !!!

This was troubling me for a long while - why does it seem that the quality of thinking our younger generation ( those in their twenties now) has deteriorated drastically compared to the twenties of my generation.

I chanced upon a few writings of some 18 year olds of my generation. I was stunned at the depth and deepness of their thinking? I looked at some of my own writings - I was writing philosophical stuff, politics and religion at 16 ! All these was normal for my generation and I dare say those writings would be considered "too high level" even for graduates of today> So, what went wrong?.

1. Firstly,  I think is the politicisation of the National Language. The use of BM as a medium of instruction and thinking has actually hindered thinking abilities and education potentials. The reason is simple - BM is limited in words and in concepts. The less words you have the less you are able to think and conceptualise. There are many concepts in the English language which is alien to the Malay culture (which determines the BM). The potential to think is curbed by the limitation of the Malay language. Matters are made worse by the inefficiency of Dewan Bahasa to churn out effective words in BM.

There are not many quality books in Malay and since it is the Malay officer who decides what books to be allowed to be translated into Malay, the more zealous "nationalist" ones does not allow critical stuff to be translated. Books in Malay or bahasa Indonesia which is critical are banned. So, society's thinking levels is being shaped by the low level thinking of the officers put in charge.

I still shudder with shame when I recall a former KSU of the Transport Ministry saying " Kita Melayu jadi kita cakap lah Bahasa Malaysia" in a meeting when one of the persons explained in English! I later discovered that he can hardly speak English !!!

Could it because of this kind of "culture" and regressive mindset of those in authority that only books in Malay are banned while more critical or controversial books in English are not?

2. Social engineering gone wrong. The various steps and quests taken to produce more Malay graduates have not matched quantity with quality. Quite apart from making local Malay graduates insular, they have been given a wrong impression of excellence by giving mediocrity the semblance of excellence. The entire country is now suffering from mediocre and weak human capital in all of its sectors - private and especially public sector.

3. Politicisation of education - the curriculum itself has been compromised by those in authority who are least qualified to determine the contents of education. There has been no long term educational policy since Merdeka which kept changing with changes in the Minister of Education Manipulation and skewing of facts in the contents of subjects such as "history", "kajian am" and so on.

4. Religiosity in schools - this was and probably is the biggest hindrance to quality education. Pseudo-religious teaching and packaging masquerading as Islam in schools has distracted the teachers to teach relevant subjects effectively and distracted the students from learning. Religiosity seemed to have crept into every sector of the schools. Today this has also crept into almost every sector of the government and ministries to the extent that efficiency and relevance has been compromised.

What do you think ?

In the name of Allah Most Gracious, Most Merciful.

1.         Every Muslim since a child is taught to begin with the utterance of bismillah hirrahman nirrahim before he does anything. It means "In the name of Allah Most Gracious, Most Merciful".

2.         This is a constant reminder of the grace and mercy of Allah on his creations. It is a statement of His infinite compassion and forgiveness. In fact Allah describes Himself as “one who forgives again and again" (see Quran 20:82)

3.         A true mukmin or believer of Allah will have compassion, grace and mercy within him when he deals with the creations of Allah which includes his dealings with fellow human beings - whether believers or otherwise.  A true believer does not insult the gods of others or poke fun at their beliefs degradingly . Can a person who goes around with his skull cap on his head, projects himself to be a Muslim political leader be anything more than a hypocrite when he consistently and deliberately goes against the following commandment from Allah?;

“Revile not you those whom they call upon besides God, lest they out of spite revile Allah in their ignorance. Thus have We made alluring to each people its own doings. In the end will they return to their Lord, and We shall then tell them the truth of all that they did”. (Q 6:108)

4.         Believers are taught by Allah to debate, argue or discuss with others with differing views in the most intelligent, wise and polite ways possible. There is nothing in the Quran at all where believers are ever enjoined to be harsh with others in matters of faith or to exercise oppression or compulsion to bring others to the path of Allah.

“Invite (all) to the Way of your  Lord with wisdom and beautiful preaching; and argue with them in ways that are best and most gracious: for your Lord knows best, who have strayed from His Path, and who receive guidance”. (Q 16:125)

5.         Today we witness persons speaking in the name of Allah with total arrogance, impunity, harshness towards fellow human beings and completely without compassion even to fellow believers who may have differing views. Some of these persons are termed as "scholars" simply by virtue of the fact that they were fortunate to obtain papers of qualifications from Universities.  They either forget or do not want to remember that any sincere ordinary Muslim with differing views from them may ask them the following question taught by Allah in the Quran:

068.039  Or have you Covenants with Us to oath, reaching to the Day of Judgment,
(providing) that you shall have whatever you shall demand?


6          But they lack compassion, politeness, mercy and forgiveness in their speech and their actions - all these being virtues of a true Muslim as explained in the Quran, the revelation from Allah. Lacking all these, they exhibit "pharaonic" characteristics of oppression by compelling others to submit to their views of what the teachings of Allah are.  No one is allowed to hold a different view or interpretation of how to submit to Allah without their approval and consent. Does this not remind those who believe in the Quran of the meeting between Firaun and  Prophet Moses:

a) “Said Pharaoh: "Believe you in Him before I give you permission? Surely this is a trick which ye have planned in the city to drive out its people: but soon shall you know (the consequences). ( Q: 7:123)

7.                 Efforts to be on the straight path ordained by Allah is being hindered by people who lack compassion, arrogant and who place themselves as the sole interpreter of Allah's verses in the Quran. They have absolutely no shame or fear of Allah in compelling on you their version of religion that you must follow completely unmindful of the following verses from the Quran:
“Say: "What! Will you instruct God about your religion? But God knows all
that is in the heavens and on earth: He has full knowledge of all things”. (Q49:16)


Can those who are oppressive, unforgiving, arrogant and totally lack compassion be servants of Allah or true believers (mukmin) ? Or are they hypocrites out to cause mischief and hinder human beings from the path of Allah for self-glory and wealth?
I leave that question for you to ponder.

NOTE: The above views are entirely my understanding and no one is required to agree with them. Kindly check with your own copy of the Quran and make up your own minds and thoughts. If I have erred in my facts, kindly highlight to me.

Rest in Peace YB Karpal Singh, the Tiger of Jelutong 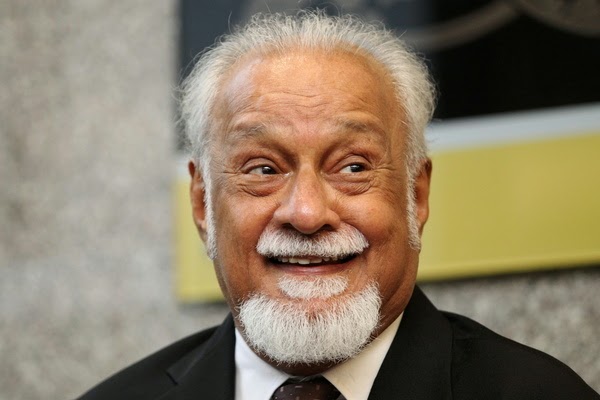 Words always do not come easy to express what one feels when he hears news of the death of someone he knows well and respects.

I have known YB Karpal since very young and so does my family. My sister what's app me thus:

"I am feeling very sad. I know Karpal as a brother who used to bring lunch everyday for me and his wife Gurmit in the Penang library". I whatsapped her back:

"His time has come and we can only wish his soul the best as God pleases. He passed away in the course of duty - not many get that opportunity at his age - he's lucky".

I have always had the utmost respect for him as a lawyer . The case laws are evident of his contribution to the development  of law in the country. Though I may not agree with some of his politics, nevertheless I have respect for his sincere commitment to his politics - there are not many politicians like that around in this country or in the world.

He is a brave soul who speaks his mind and an extremely hardworking man - both in law and in politics. I have always known him to be kind in my dealings with him.  Only "regret" I have is that we never got about to do a talk show with him on "Rapera" because of our respective busy schedules.

His contribution in national politics is immense that he should be awarded a national award posthumously - this will speak well of incumbent politicians' maturity.

My deepest condolences to his family and may whatever good he had sought for be continued.