“But fate always plays out unexpectedly to determine leadership”, he said slowly while his eyes looked far into history. I waited in anticipation.

Looking at me, he continued. “While the President was planning to take me out, something happened. Just three days after the politburo meeting to sack me, his son, Lepaki was implicated in an attempt to overthrow the President and to assassinate me. It turned out that he was leading a group of rebels. The President’s car blew up with a planted bomb and my house was attacked by armed rebels in the middle of the night.”

I interrupted him, “Wait a minute Sir. I did some research on the internet on this so called rebellion by the President’s son. Treason? Against his own father? The facts and news on the internet seem to doubt the entire incident as staged by someone else. There are even accusations from many parts of the world that it was staged by you”.

He retorted, “Absolute nonsense! For the record, I saved Lepaki from the punishment of treason against the President by using my Presidential power of pardon. However, the people’s sentiments were beyond control with all the photographs splashed on the internet.”

“That’s another thing, “, I said, “How did the photographs get on the internet so quickly and so conveniently to implicate Lepaki…even before he was arrested? And those people whom he was photographed with look like some young people he was having fun with at the pubs and various places”.

“Ah! But these very same young people were arrested outside my house by our police who arrived quickly the very same night of the assassination attempt on me. It is evidence of collaboration and knowledge. The police had also recorded confessions from the rebels that Lepaki is their leader”, he emphasized.

Pausing for a while, he continued’ “And a 100 day trial proved his involvement”.

I inadvertently laughed when he mentioned the trial. All over the internet, the trial was denounced as the greatest shame to Juburti judiciary with all the three judges alleged to have very close links to Dr Rasuawahi. In fact, it is strongly alleged that the entire police team and the prosecution team involved in the prosecution of Lepaki were people indebted to him.

He looked at me displeased with my laughter. “You are not insulting our judicial system like the western press, are you? The West is the enemy of the developing and third world countries. Don’t you ever forget that. It was a fair trial and having defended himself with a team of the best defence lawyers, he was found guilty”.

Sounding like making a press statement, he said, “Yes. There was an assassination attempt against me in 1999 and a plan to overthrow the President. Anyway, as destiny wills it, I became president in the same year. Here look at this paper report. He handed me a newspaper cutting.

There were many things amiss in the alleged assassination attempt and the implication of Lepaki. One also cannot avoid noticing that the tables were very quickly turned against his very foes – the President and his son. I had a lot of questions to ask but since his voice had a tone of finality, I decided to just look at the newspaper cutting that he handed me. 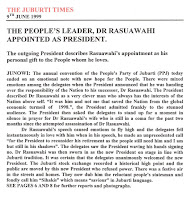 “It says here you wife was in a coma? What really happened?”

“Yes. In the attempt to assassinate me, my wife Konveniens got shot by a stray bullet and she’s still in a coma until today…been 7 years now”.

I was perplexed. If indeed this was an event staged by Dr Rasuawahi himself, would he sacrifice his wife too? It is difficult to fathom to what length politicians will go in the quest of power.

“That’s horribly sad”, I muttered. “And when his son was charged in court and his daughter was in a coma, the President lost his will?”

“Yes, the implication of his son in the attempted overthrow of the Presidency and the coma state of his daughter ….. was simply too much for the old man. He slowly gave control of the State to me. Furthermore, it will be embarrassing for him to pardon his own son. I promised him that is the first thing that I will do as President”

“What happened to Lepaki after the pardon?”

“Well, we send him off to Sweden to live and undergo treatment in Sweden. However, he seemed to have contracted an unidentifiable disease that wastes his muscles while he is there”. Dr Rasuawahi took a deep breath as if he was feeling sorry for Lepaki.

Aha ! Getting more thrilling and more and more suspense ! Hope chapter 6 not in your pendrive again !