A great leader has walked on earth and has passed away on 5th December 2013 at age 95. Without doubt he is an excellent personification of a Rapera. 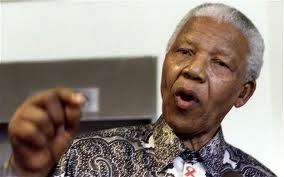 That was Nelson Mandela, who emerged from prison after 27 years to lead his country out of decades of apartheid.
He died Thursday night at age 95.
His message of reconciliation, not vengeance, inspired the world after he negotiated a peaceful end to segregation and urged forgiveness for the white government that imprisoned him.
"As I walked out the door toward the gate that would lead to my freedom, I knew if I didn't leave my bitterness and hatred behind, I'd still be in prison," Mandela said after he was freed in 1990".
Peace !
Posted by Jahamy at 6:07:00 PM